The Five Whys of What You Do

In Warren Berger’s book Glimmer he talks about the Five Whys concept of the design company IDEO. It boils down to asking yourself ‘why’ you do something, and then asking ‘why’ you gave that answer, to the tune of five times.

So, for example (from Glimmer): 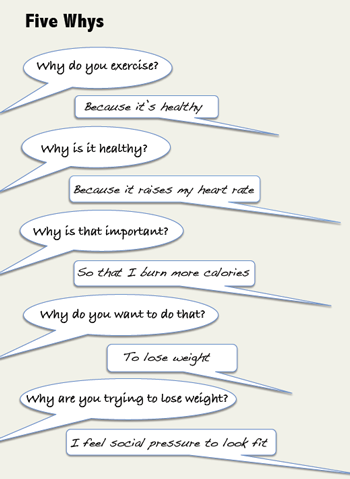 I think this example is a little forced, but the idea’s sound. I want to apply it now to my working life, or the aims of my work. Why do I build websites? To make money. Why do I need to make money? To feed myself and pay rent…

But even at this stage of the process, I think I’ve gone into a bit of a hole.

For your company, is the answer to the question “Why do you…?” immediately get to “To make money, to pay the rent, and to save to pay for my holidays…”? If so, maybe it’s time for a rethink.

If you’re just earning money to give yourself a break from earning money, then you must be able to see the problem, especially if you’re dissatisfied with your lot in life.

How about a cycle of Whys which end the same way they began? In short: Why do I write? To get my ideas out there. Why do you want to do that? Because if enough people buy my books then I’ll have enough money to keep writing, instead of getting a proper job that I’d hate.

If you run a company that has to fool people into buying things they don’t want, for example by making them desire things they don’t need, or by suggesting that other people’s stuff is better than theirs, then you’re the reason people hate advertising, and you’re the company people hate generally. The company that people have no need for, and no desire to support. Maybe that’s why you’re unfulfilled in your current role.

At the same time, if you’re only role in the company is your legal duty to increase shareholder profit, then it’s likely your on an unsustainable path to ridding the planet of all its resources.

So, if you’re not Doing X to allow me to continue to Do X, then there’s a huge gap between what you’re doing, and what you should be doing. Don’t be surprised if no one cares about that.